What makes the Albanians ALBANIAN: A witty guide to the airs and affectations that affirm the Albanian attitude.

To read a sample, click on the book cover to the right >

A 'no' in many countries is the end of a discussion. In Albania it can herald the start of a negotiation.

If you would like to comment or submit a review on the Xenophobe’s Guide to the Albanians please do so in the box to the right.

Best Albanian expressions  Read what some of those Albanian idioms really mean! 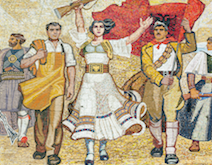 Rita Ora keen to stage X Factor in Albanian mansion    Click here to read more.Rita Ora moved to England in 1991, when she was a year old and her parents wanted a better life for the family. She was born in Kosovo to Albanian parents. Her mother, is a psychiatrist, Vera Sahatçiu (née Bajraktari), and her father is an economist and pub owner, Besnik Sahatçiu.  She was named after the favourite film star of her film director grandfather Besim Sahatçiu, Rita Hayworth.

A few things I found really funny while travelling to Tirana, Albania by Kimmo.

Albania was actually one of the few countries I couldn’t get a grip of at all. People were really friendly and the food was absolutely outstanding. I can’t really put a finger on it at all but I guess it just means I’ll need to spend another few weeks there again sometime. Here’s a few things I found funny while travelling to Albania.

Alan Andoni spent his formative years in England, Northern Ireland and Scotland. His interest in all things Albanian began in the 1970s as a dedicated listener of foreign radio broadcasts. Radio Tirana was a particular favourite for its surreal, but stirring narrative.

Visits to Albania over the years have convinced him that there is an allure which is both positive and infectious to anybody who spends any significant time there. He finds he has developed an aversion to micro-planning, a yearning for spontaneity and a tendency to commit random acts of kindness. He also tries to multi-task, but as a Northern European male, he still can’t quite manage it.