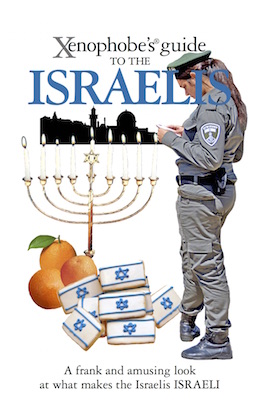 What makes the Israelis ISRAELI: A guide to understanding the Israelis that unravels their idiosyncracies and national characteristics.

A true Israeli speaks with the

self-assurance and vehemence of a prophet.

If you would like to comment or submit a review on the Xenophobe’s Guide to the Israelis please do so in the box to the right.

Born in Israel, Aviv Ben Zeev attributes his Angst to a father who is of German descent and his temper to a mother who came from Argentina, a combination that made him a bit eccentric. Growing up he learned to take nothing for granted and to try never to be a freier.

After four years in uniform, he waved aside what could have been a brilliant career as a second-rate classical guitarist, and set out on his post-army trip. In the course of this he found himself in a college in New Zealand teaching about Israel, and at the University of the Kingdom of Tonga amusing students with tales from the Holy Land. He also discovered a passion for airports.

Having joined the circle of telecommunications company employees, it is in airports that he may be found most of the time, en route to this or that remote country, a regrettable situation that gives his family unparalleled cause for complaint.

His home, all too infrequently visited, is situated in a Tel Aviv suburban town, where he can sometimes be spotted circling about in his car, searching in vain for a parking space. All in all, trying to keep his place – on the Map.