What makes the Scots SCOTTISH: A guide to understanding the Scots that gets under their kilts to reveal all in an affectionate and humorous fashion.

The Scots like to feel that they are a rather flamboyant and colourful people – tartan inside as well as out.

If you would like to comment or submit a review on the Xenophobe’s Guide to the Scots please do so in the box to the right.

“Let it Snow, Let it Snaw, Let is Sneesl”. Scotland has more than 400 words and expressions for snow, according to a project to compile a Scots thesaurus. Click on the image below for a flurry of other terms. 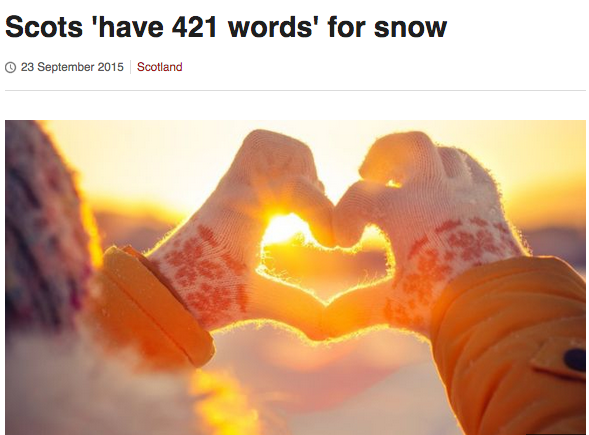 David Sutherland Ross is a fully fledged member of that well-established species, the Scottish literary exile. Born in Oban, Argyll, and furnished with a Scottish education, he migrated to London intending to become a journalist, but became a publisher instead.

Having learned from writing blurbs for other people’s books how to represent a tangle of ill-assorted elements and random events as a unified whole, he was eminently qualified to write a history of Scotland. The outcome was Scotland: History of a Nation. He went on to become a full-time writer and compiler of anthologies, including Awa’ and Bile Yer Heid, a collection of Scottish insults and invective described as ‘rich and ripe offensiveness’. Its success assures him of a pile all to himself in Scottish bookshops.

His latest book, Auld Enemies, is a not-entirely serious examination of the thousand-year relationship between the Scots and the English.