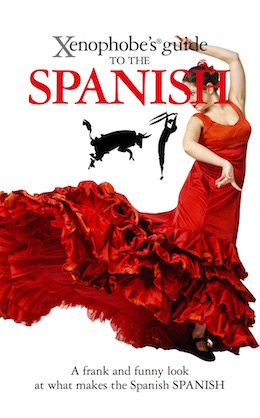 By Nick Lawson and Drew Launay

What makes the Spanish SPANISH: A guide to the Spanish that shows there is more to them than sangria and siestas.

If the Spanish show off at all it is through noise, preferably at night to make sure that everyone is aware that they are still around.

If you would like to comment or submit a review on the Xenophobe’s Guide to the Spanish please do so in the box to the right. We also occasionally put up links to other sites with interesting and humorous insights on the quirks and characteristics of nations, please see below for the latest.

After stints in Australia, Hollywood, New York and Toulouse, Nick Lawson discovered the existence of a country of hospitable, disorganised, undisciplined, fun-loving insomniacs, and realised it was tailor-made for him. He settled in Madrid where he has spent two decades teaching English, setting pub quizzes and learning to speak fluent Castilian, albeit with the same deplorable English accent that he brings to Italian, French and Arabic.

Having lived in Spain for so long he is now incapable of lunching before 2 or dining before 10. He has joyously embraced Spanish chefs’ generosity with garlic, but not their more outré offal offerings.

Born in London of French parents, given an English education, finished in France, living in Spain and speaking three languages, Drew Launay (R.I.P.) was the consummate European: one who found no difficulty driving on either the left or right side of the road.
Author of numerous BBC broadcasts on life in Spain, several stage plays, and a dozen novels written under various pseudonyms, he lived in Nerja, east of Malaga, where he and his fiery, foot-stamping Andalusian wife conserved energy for life and innumerable local fiestas by never missing a siesta.