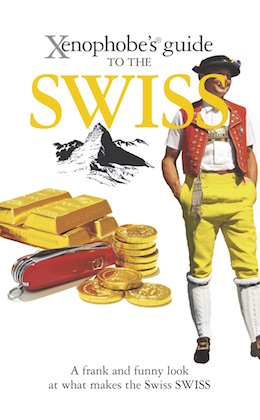 The Swiss are the only nation to make the Germans appear inefficient, the French undiplomatic and the Texans poor.

If you would like to comment or submit a review on the Xenophobe’s Guide to the Swiss please do so in the box to the right.

The Xenophobe’s Guides are all about cultivating cultural awareness. These aspects of the Swiss selected by the author Paul Bilton appeared in The Local (Switzerland’s News in English). Read more by clicking the image below:

Born in Southport, Merseyside, Paul Bilton has become what is known somewhat unaffectionately as a ‘paper Swiss’. (First marry a Swiss, then live in the country for five years, fill in forms, wait another 18 months, and finally hand over several hundred Swiss francs in cash for the paper which grants you Swiss nationality to the local postman when he delivers your mail.)

After careers in advertising (‘Ferguson’s Fertilizers Fertilize Faster’), publishing and the manufacture of plastic products under his own patent, he left Britain to become an Ausländer in Switzerland. These days between writing, broadcasting and giving talks about Swiss life, he gives odd English lessons. He tries hard to worry more, and still cannot understand why it is frowned upon to redecorate his nuclear shelter himself.

He and his Swiss wife live an idyllic life in the Zurich Oberland where he collects coffee creamer tops while she embroiders car cushions. They enjoy a near perfect diet of muesli and Rösti, but never on the same plate.